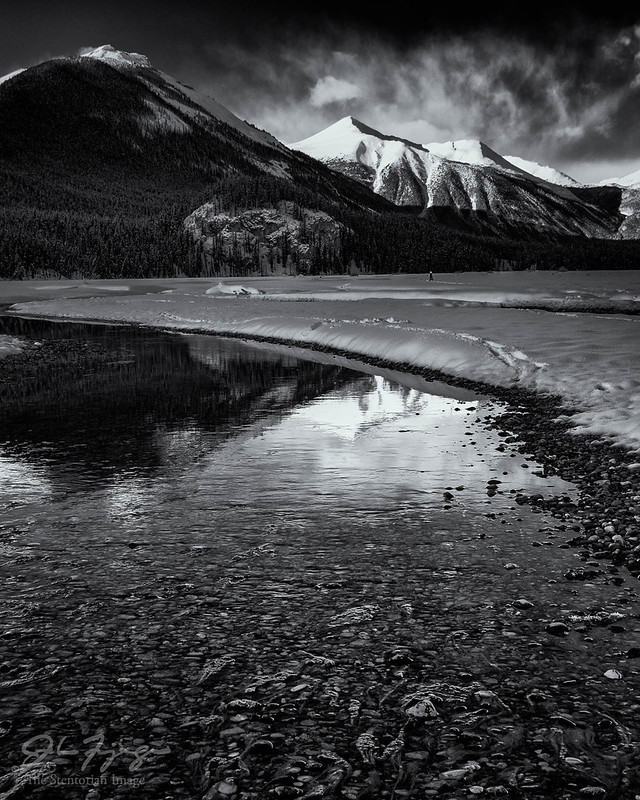 When out shooting with a group, it is sometimes hard to keep people out of your shot, but sometimes their tracks still get included. It makes me wonder where they were going and why I don’t see them in the distance.

I’ve been doing more work in Black and White lately. Some of it is a return to my roots developing and printing my film, without the chemicals, smells and mess; and some due to lively discussions with friends aimed at working a better image. This has been mistaken as a night image but it was shot around lunch time in late November a few years ago. I wanted the dark moodiness and the reappearance of the sun to relieve us from a sombre time.

This image was taken in 2009 on Darwin Wiggett’s Fire & Ice Photo Tour. The location is Graveyard Flats on the Icefields Parkway between Banff and Jasper National Parks. The snow encroaching on the open water is just over knee deep and there were significantly deeper spots getting to this location. I remember it as the beautiful day that it appears to be here. One of the things I love about photography is that it preserves your memories.

When I visited Graveyard Flats in November 2009 it was covered in snow and looked pristine, but apparently things were not all they seemed. Shooting at the same location in the summer, Darwin Wiggett discovered beneath the snow, garbage like oil drums and other things, possibly dating from the road construction.

END_OF_DOCUMENT_TOKEN_TO_BE_REPLACED

Darwin Wiggett is working on organizing a clean up of the Graveyard Flats area in Banff National Park. If you would like to help or contribute, Please let Darwin know.
Thanks, John

I was just going through my images trying to finish processing all the shots from 2010 when I came across these images. I had  posted previously that I wanted to organize a clean-up of Graveyard Flats in Banff. Seeing these photos reminded me to put this task as a major priority for 2011. If you are interested in being involved send me an email at wiggett@telusplanet.net. If you already sent me an email you do not have to send another one. I will … Read More