Clouds And The Wall 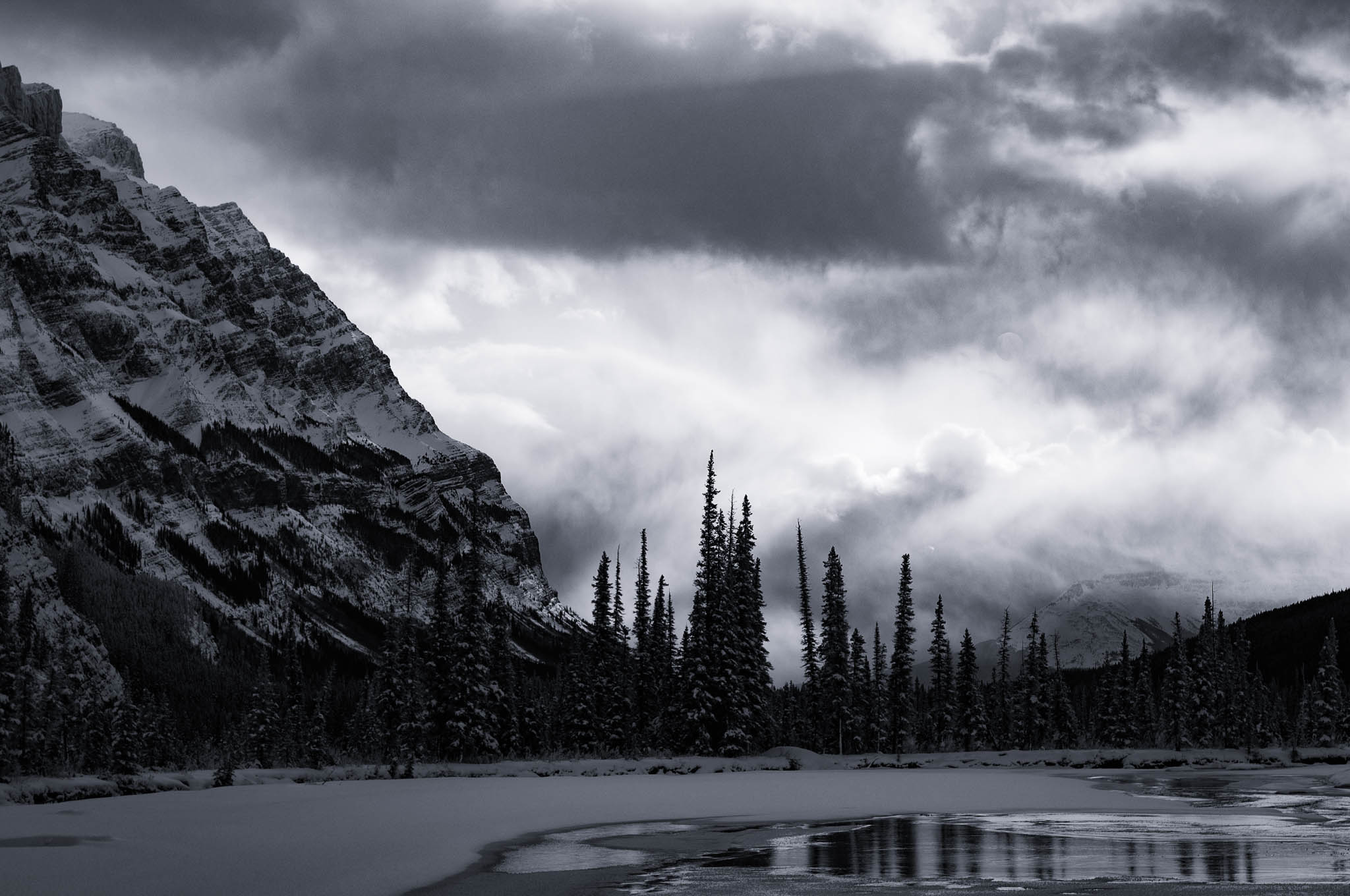 The clouds roll up to the mountain and get stopped or go over. The weather in the Rockies is ever changing. 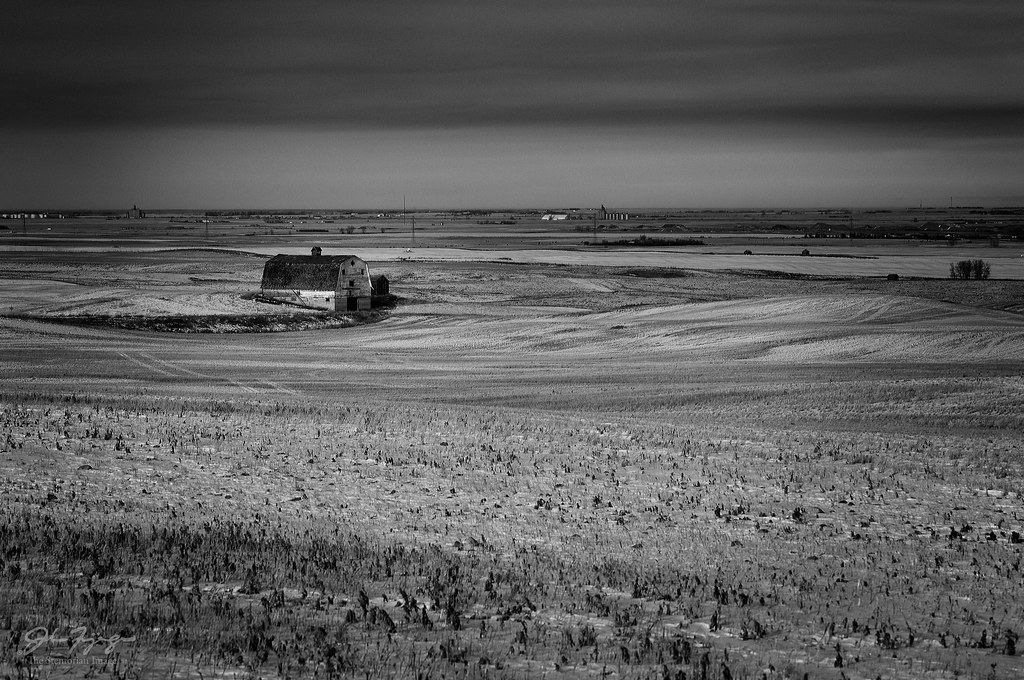 Wandering around the countryside you can see many barns, but it’s not often that they are by themselves. The livestock that used to go into the barn are long gone. Even the fences and corrals normally associated with animal husbandry have been removed. You wonder what happened and what changed. 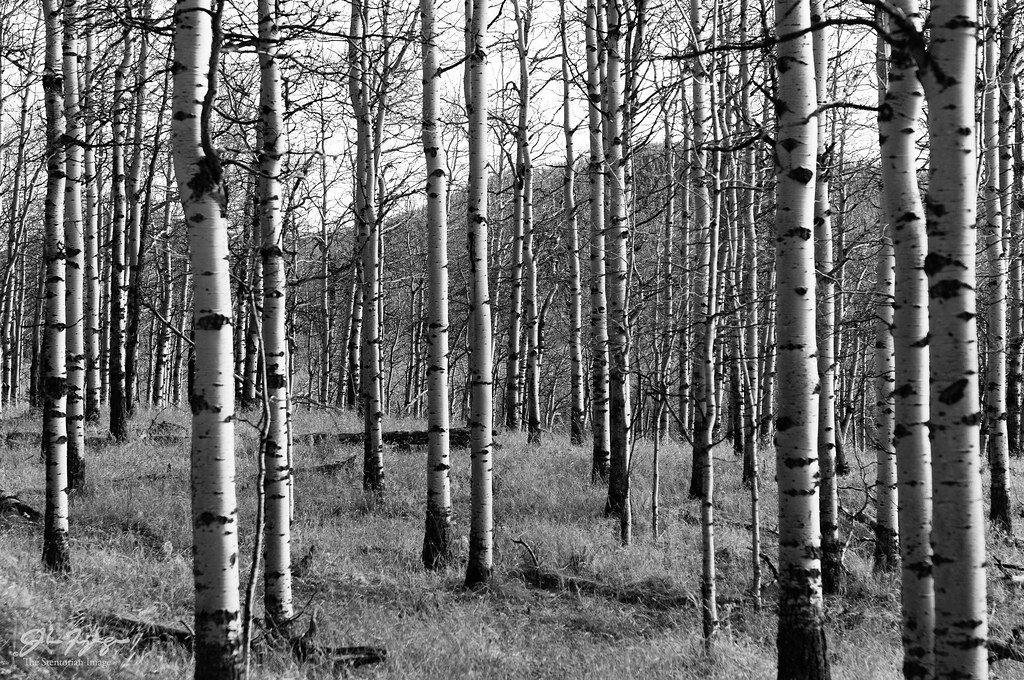 A simple shot of aspen trees in the Alberta foothills, after the leaves had fallen. I converted it to black and white to emphasise the starkness of the scene. The light coloured trunks with the dark markings lend themselves to a monochrome medium. 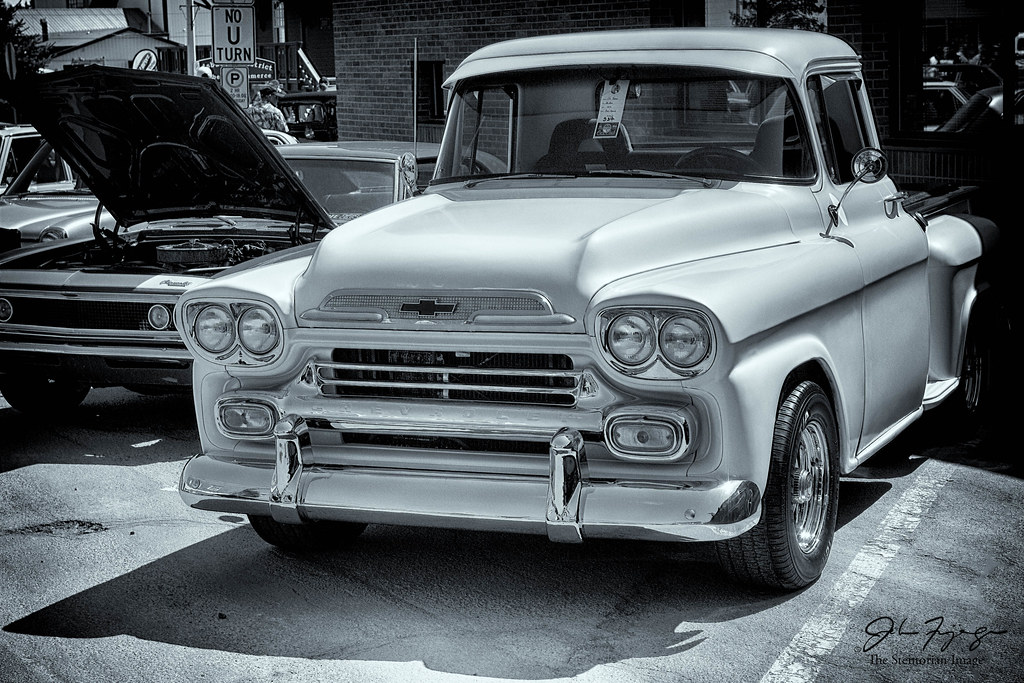 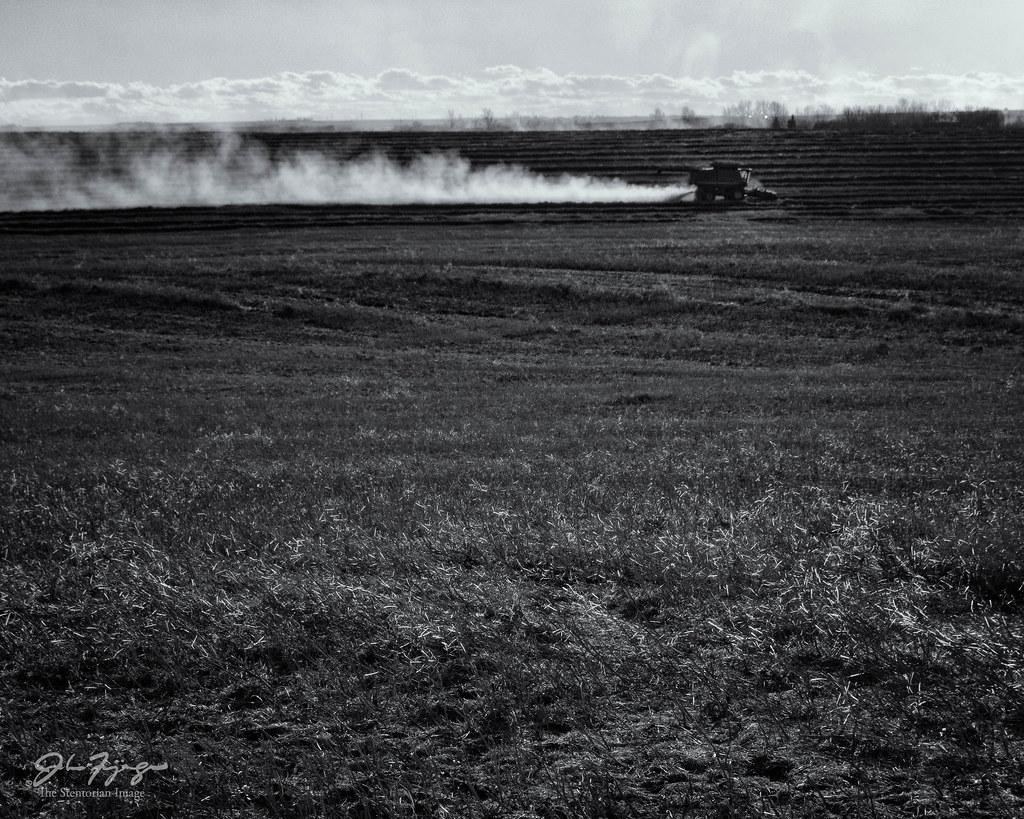 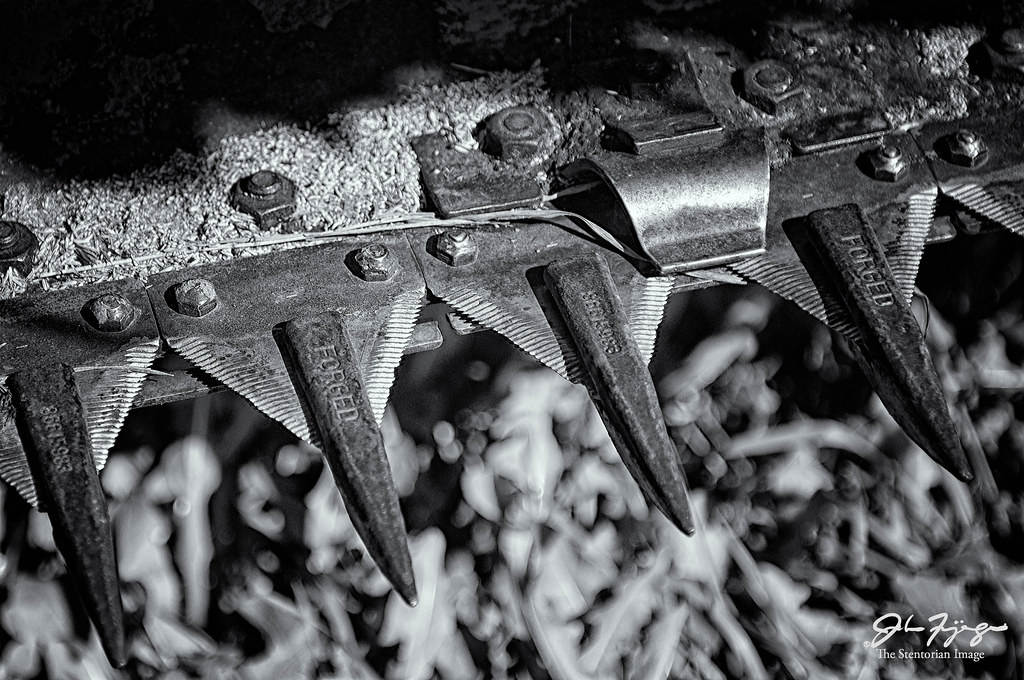 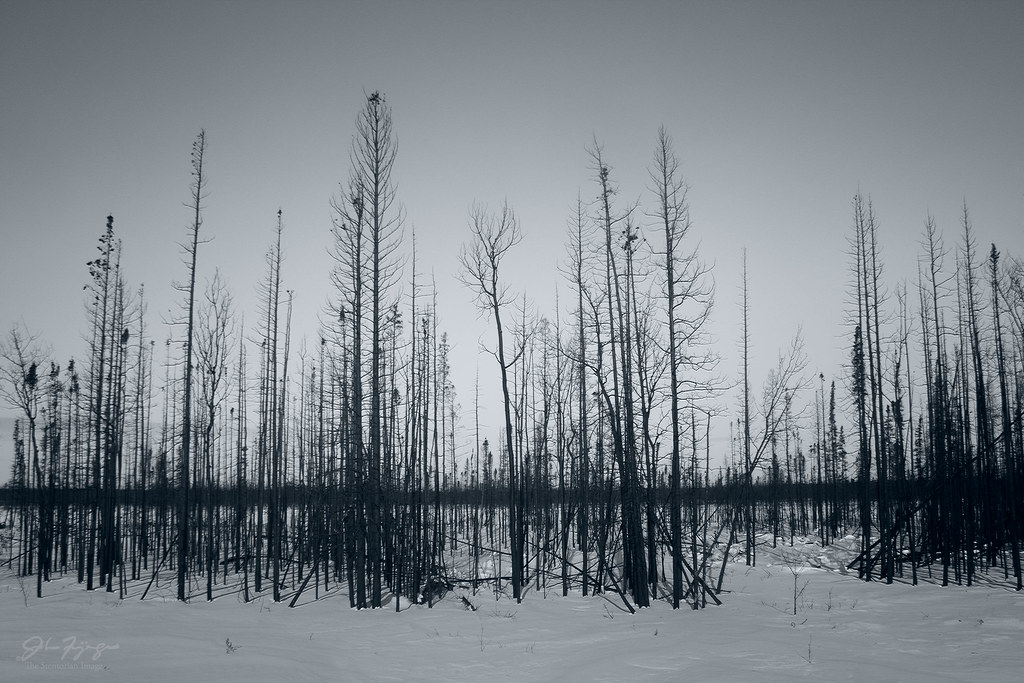 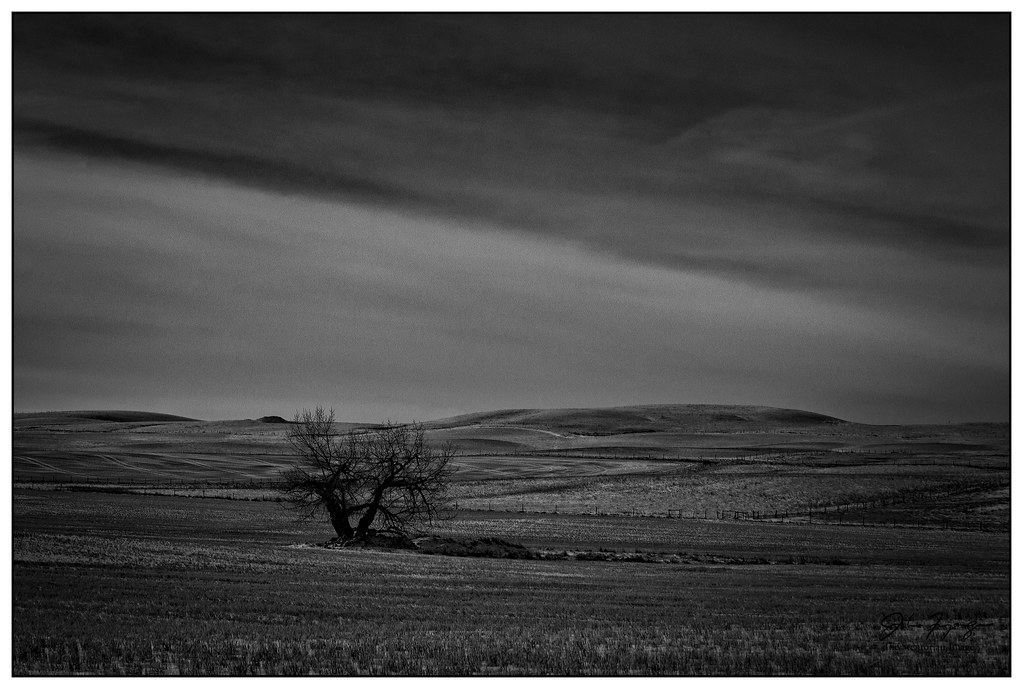 When driving somewhere, I often take a cross country route, taking secondary highways and even some gravel roads. It takes longer because I drive slower but I see more and if I leave earlier, I have time to stop and take pictures. I saw this tree and knew that I had to stop and make a photograph. It made me wonder how long it had been there and what it took for it to survive. I think that there is a small dugout behind, hidden by the limbs. Close enough to the water hole to drink in and escape the plow. I think the lesson that I learned here was, that perseverance will get you farther in the end. 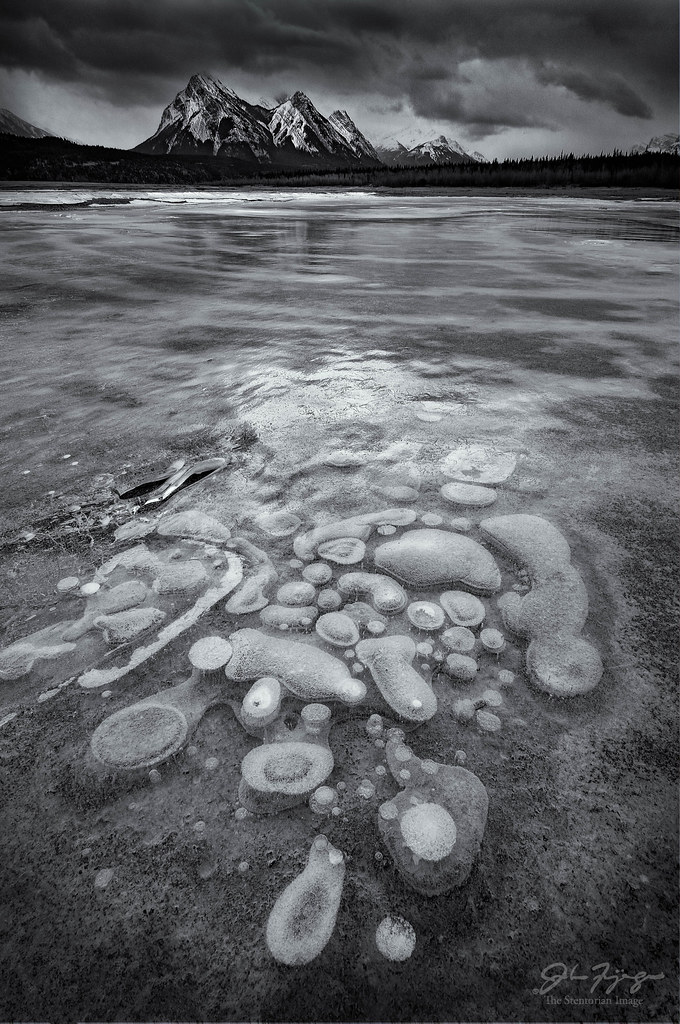 Photography is often a work in progress. As you develop your skills and learn new techniques your images can improve in quality and expressiveness. This is an interim copy of this scene that I’ve been working on in the past weeks. I’ve made some changes to my workflow and am implementing more features in Photoshop itself.

This is an image of Abraham Lake, east of the Saskatchewan River Crossing just outside of Banff National Park. It is well known for the methane bubbles that form in the ice on the surface of the lake.

Edge Of The Field

On a field with low wet spots, the machinery has to go around them or risk getting stuck in the mud. It does create interesting patterns in the fields.

I converted this image to monochrome to highlight the different lines and contrasts in the crop. 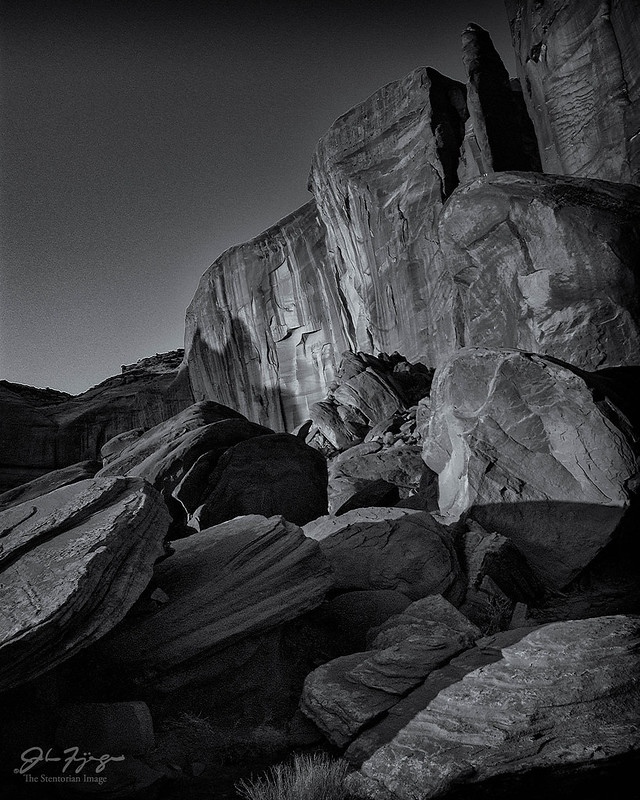 In Monument Valley, the red coloured rocks are quite prominent and the vivid hues are in your face. I thought that removing the colour and presenting the scene in black and white would show the grain and structure of the giant boulders and cliff face. Hopefully the tuft of grasses included at the bottom of the frame gives the image a sense of scale. 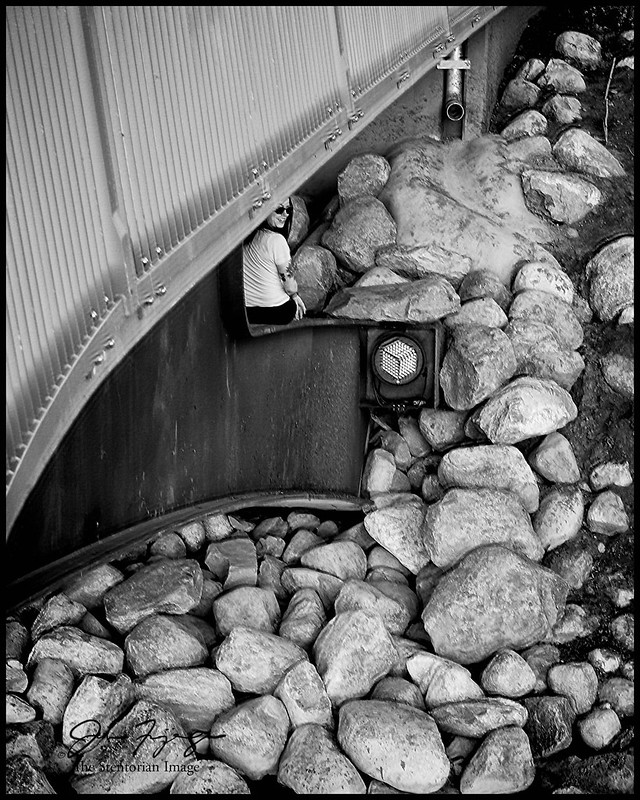 While crossing over a pedestrian bridge on the Elbow River, I heard the sound of talking and laughing. It was coming from under the bridge. I leaned out over the guard rail and grabbed a few frames. In only one the young girl has her head turned with a smile. In this case, the vertical format leads the eye up into the image. I converted to black and white in Silver Efex Pro to remove the colour and focus on the contrasting forms and textures. 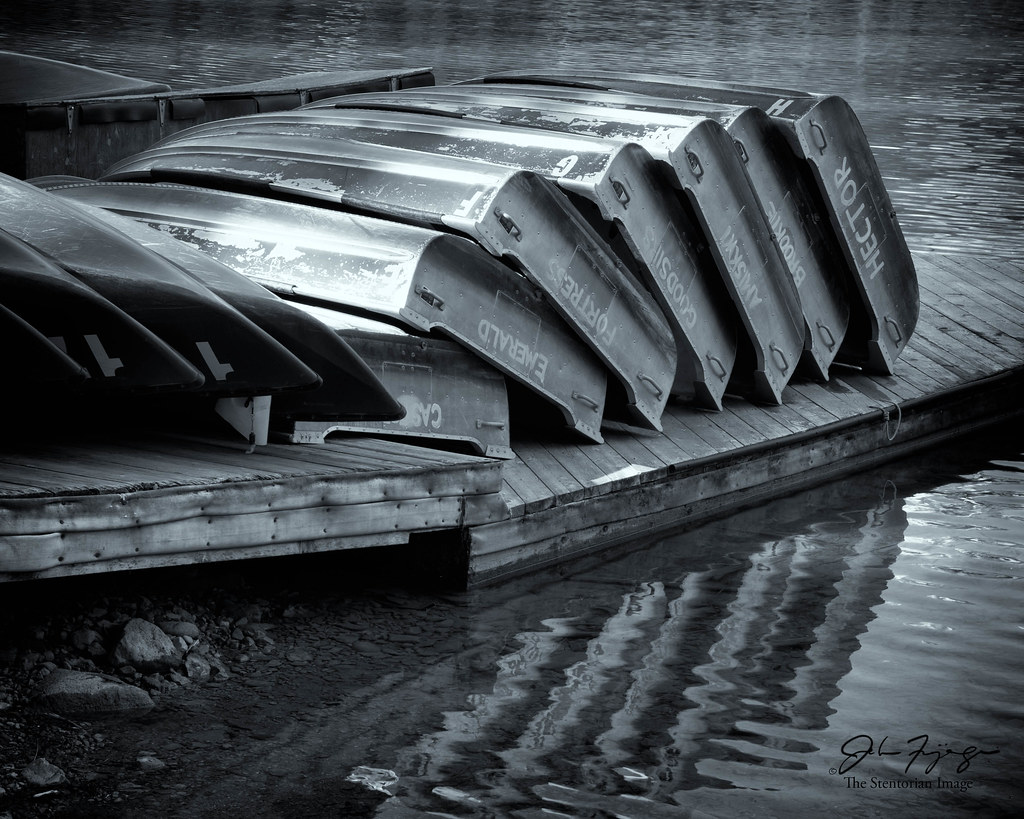 I’ve been going over a few older images this week and processing them. Some had been done before, this one had not been previously posted. I liked the repetitive shapes and lines. I also found the names of the boats interesting. Can you identify the sources for the names?

This blast from the past was taken on a 2008 trip to Prince George, BC at the Norton Ranch. The area was hard hit early by the mountain pine beetle. Where a forest once stood, this lone tree is a stark reminder of what once was.

I found this image resting unprocessed in my archives, and thought it would be a good candidate for conversion to black and white. It was done in Adobe Photoshop CC and Nik Software’s Silver Efex Pro 2.

One of my favourite images that I’ve made recently. A simple snow covered hillside with a small grove of trees is turned into a study of light and shadows.

Many of my first memories of photography were of processing black and white film in the darkroom, and looking at Ansel Adams pictures. I’ve always liked the detail and contrast in my monochrome images. I used Nik Software’s Silver Efex Pro 2 in Adobe Photoshop CC to create the sort of image that I remember. I used the red filter and the Kodak Panatomic X film effect to get closer to what I liked.

Photographers like what they call “God Rays” or crepuscular rays. They make an interesting aspect to an image. The rays are formed when sunlight shines through small openings in the clouds. They are more noticeable when seen against a darker background.

Travelling west of Calgary, near Morley, Alberta on the Trans-Canada Highway, I spotted this scene, and knew it would make a great image. I chose to post process in black and white to accentuate the texture in the clouds.

Bow Valley In Black And White

Bad weather makes for more interesting images. The first image is looking west, up the Bow Valley with the Lafarge cement plant’s plume of smoke rising in the fairly calm air. (calm air, how unusual)

END_OF_DOCUMENT_TOKEN_TO_BE_REPLACED

An over cast day at Vermillion Lakes in Banff National Park is always a treat for me. The shaded light is ideal for it’s evenness. No harsh shadows glare out at and you can explore the details in your scene. I was glad to retain some detail in the clouds above Mount Bourgeau. A tree floating in the lake adds some interest to the foreground.

I had got my D300s wet in the rain at Lake Louise, and it was still drying out when we got back to Banff, so I turned to my backup camera, my old D80.